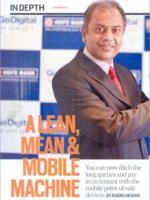 You can now ditch the long queues and pay in an instant with the mobile point-of-sale devices.
Next time you are out shopping, you might find the girl at the counter flashing a sleek gizmo at you to swipe your plastic on. Its a mobile point-of-sale (mPoS) unit  your old-world, brick-sized PoS trimmed to fit into a smartphone or a tablet. At about Rs 10,000  or half the cost of what merchants currently shell out  it will swipe you off your feet; it can help reimagine the payment landscape and retailing businesses as we know them.

This article was originally published in Business World

The main difference between PoS and mPoS is in the form. Any smartphone or tablet can become an mPoS with a downloadable mobile app. The business owner registers the app; the vendor sends a card reader that can be plugged into the mobile devices audio jack. Some mPoS software vendors also provide optional hand-held docking stations (called sleds) that allow the mobile device to read barcodes and print receipts.

The latest Mint Road monthly bulletin shows we have 575 million pieces of plastic (553 million debit and 22 million credit cards), but just over a million PoS terminals. We have, as Ernst & Young (EY) says, one of the lowest set-up of PoS terminals (per million) in the world at 693. Brazil has 32,995; both China and Russia have around 4,000. Not only has PoS rollout not kept pace with plastic issuances, you also have a skew. Points out Mahesh Makhija, partner, Advisory-Financial Services, EY: More than 70 per cent of the terminals are in the top 15 cities and contribute to over 75 per cent of volumes. And only 1.1 million of the more than 10 million retail touch-points have PoS units.

But you can sense a new firmness underfoot. Says Srinivas Nidugondi, senior vice-president and head of Mobile Financial Solutions at Mahindra Comviva: The idea of cashless transactions is gaining momentum. It’s gradually changing as the usage of credit and debit cards at PoS has seen a growth of 86 per cent in the last two years. Parag Rao, senior executive vice-president and business head, Card Payment Products & Merchant Acquiring Services, HDFC Bank, sees CoD (cash-on-delivery) as a big driver for mPoS with the boom in e-commerce. As well as for payments for insurance policies, all kinds of home-delivery businesses, restaurants, taxi service providers, pathology labs and what have you.  If we can hook into all this (with mPoS), we can get non-cash (transactions) to double in the years ahead, says Rao. But for that, both PoS and mPoS have to become ubiquitous.

As on date, cash is not just on the throne, a lot of it snuggles under the pillow as well. Only 4 per cent of transactions are non-cash. Now while banks can do little about the fact that many want it that way, its got larger implications. Ninety six per cent of consumer payments is in cash with millions of retailers across the country preferring cash payments to avoid traceability and paying taxes, which is not surprising given only 35 million of the over 1 billion Indians pay taxes, says T.R. Ramachandran, group country manager, India and south-Asia, Visa. This adds to cash-handling charges: Mint Roads Annual Report (2013-14; its the latest) puts it atRs 3,200 crore (Rs 2,800 crore in FY12-13).

What you can’t get away from is that its no good to issue plastic to all comers if at the end of the day, they can’t use them.

From PoS to mPoS

The cost to set up a PoS unit is high due to cut-throat competition between acquiring banks and low discount rates. That is the reason behind the low number of PoS units and their residency largely in the metros and bigger cities. Says Himanshu Pujara, managing director, Euronet (India): The cost (of PoS terminals) can’t be recovered below a certain threshold of monthly card volumes acquired at merchant locations.

The silver lining, as Nitish Asthana, general manager, First Data Acquiring Services, says is that we will primarily be a debit card market. The debit card merchant fee is significantly lower at 0.75 per cent for small-value transactions. It should enable merchants to accept cards, especially in the light of the significant cost of carrying cash. Card activation on automated teller machines and then PoS will drive the demand side of card usage. There should be incentives linked to card payments to facilitate this transition faster.

Now what works in favour of mPoS is the low-cost of hardware compared to traditional card-processing equipment. It helps that banks have knocked off the upfront set-up fee (typically between Rs 10,000 and Rs 20,000 depending on the device) and moved over to a monthly rental-based equipment leasing. But here again, whats not clear is whether outlets are ready to pay for the phone (Rs 5,000) and the dongle (Rs 3,500). Initial field reports suggest resistance even though the shopkeeper conveys this by speaking over a Rs 20,000 smartphone! It’s also not that all deployers bundle the phone and the dongle as an offering. Net result: it would be wrong to expect that all merchants will at once be gung-ho for mPoS.

That’s because merchant fees for debit transactions are at 0.75-1 per cent and for credit cards between 1 and 2 per cent. These fees depend upon the size of the transaction, type of merchant and card and whether the transaction is domestic or international. Fees on debit cards are capped by regulations, and are amongst the lowest in the world, so that merchants have incentive to expand debit acceptance, but a lions share of the merchant fees  90 per cent or more, whether on debit or credit transactions, goes as pass through to the issuing bank and card associations, says Asthana. What’s unsaid is that merchants are asking for the moon!

What will soon change this attitude is the pressure that will come from plastic holders and firms. E-commerce players will soon see that it makes more sense to hand over an mPoS to delivery boys as 80 per cent of sales are settled through CoD. Milan Sheth, partner and technology industry leader, EY, points to the extra charges levied by logistics providers to collect cash from customers � a combination of fixed charges for CoD collection, along with a percentage of the shipment value (1-2 per cent), which hike the cost of delivery.

Some logistics providers are known to remit collected cash after up to six weeks, which leads to working capital issues. In addition, the reconciliation of accounts with logistics providers adds another layer of administrative expense, which is expected to grow in complexity as operations grow, adds Sheth. What this in effect means is while you may say your store is in the virtual world, you collect payment for what you sell in very much a physical way.

Its time has come

You have scores of players in the mPoS space with new business cards: Mswipe (backed by investment from Matrix Partners), Ezetap (Silicon Valley investors), Mosambee (SIDBI Ventures), Mobiswipe (One97 Mobility Fund) and Paymate India (from Kleiner, Perkins, Caufield and Byers; Sherpalo and Mayfield). It tells you whats in store!

Now mPoS is not altogether a new animal on our turf. Back in 2003, HDFC Bank launched India’s first mPoS terminals by CDMA (code division multiple access) technology in partnership with Reliance Infocomm and PoS terminal manufacturer Schlumberger. It tied up with SangamDirectSM, a supermarket-on-phone from what was then Hindustan Lever and with a Pizza Hut franchisee. The mPoS terminal was connected to a Reliance mobile phone. When you swiped, the transaction was carried through the CDMA network to HDFC Bank’s payment switch, which, in turn, talked to Visa and MasterCard gateways for authorisation of the transactions. It works very much the same way even now, but HDFC Bank’s launch was ahead of its times and we didn’t hear much about it.

But it’s an idea whose time has come. While current mPoS numbers are low (it’s at about 50,000 with HDFC Bank’s share at 25,000), ICICI Prudential has shown what can be done with it. It has joined hands with Mahindra Comviva to equip its agents with mPoS devices so they can issue new policies at the customer’s doorstep; the devices will scan and upload documents for know-your-customer and policy payments. It’s part of a global trend.

A growing number of medium-sized and large merchants have taken note of mPoS. Starbucks, Nordstrom, JCPenney, Gap, Home Depot, and Sephora use or experiment with mPoS alongside traditional PoS; and have integrated mPoS platforms into payment systems. Urban Outfitters has gone a step further: it has replaced cash registers with iPad-based mPoS solutions in select US stores, and plans a wider rollout. Some large fast-moving-consumer-goods firms look to using mPoS to complement direct-to-consumer initiatives.

A caveat is in order. While large urban retailers may seek technologies like mPoS which help them in line-busting, smaller merchants may opt for a cheap and easy-to-use solution like a card-reader attached to a mobile phone. Rural merchants on the other hand, are likely to adopt bio-metric PoS terminals, which will enable them to accept Aadhaar debit cards that are likely be issued in large numbers for financial inclusion, explains Makhija to underscore it’s not a one-PoS-fits-all world. All together, there could be close to 3.5 million PoS (inclusing mPoS) in the next five years; for now, mPoS is set to take centre-stage.

And mPoS is not just a payment tool; there are other benefits too. The traditional PoS terminal is just a payment enabler. Merchants have to invest quite a bit on PoS software to keep track of sales, inventory, customers. Now small- and medium-businesses can receive these VAS (value-added services) as part of the mPoS offering, which doesn’t just help them accept card payments, but bring in a whole lot more to help them do more with low-investment, explains Nidugondi. It can also lead to a convergence of consumer-facing mobile commerce and merchant-acceptance; the jury is still out on this one.

And with 4G, expect telcos to jump in. Japan is a market where a major telco is also a major electronic acquirer. However, with banks in India so well entrenched and the economics of acquiring a merchant quite a challenge, not too many telcos are jumping with joy at the thought of becoming an acquirer in case they get a payment bank licence, says Pujara. Although we hear a leading telco is going to join the bandwagon here: the rumour is that it is Reliance Jio.

What we now see is a convergence of smartphone penetration, a large base of small and medium enterprises and micro-merchants, low penetration of traditional PoS terminals, a core base of card users that’s expanding and bank and government schemes to encourage card adoption. As telcos, banks and retail sector seek improved return on investment and increased demand for customer analytics features, mPoS will boom.

The time to pause is over!

This article was originally published in Business World