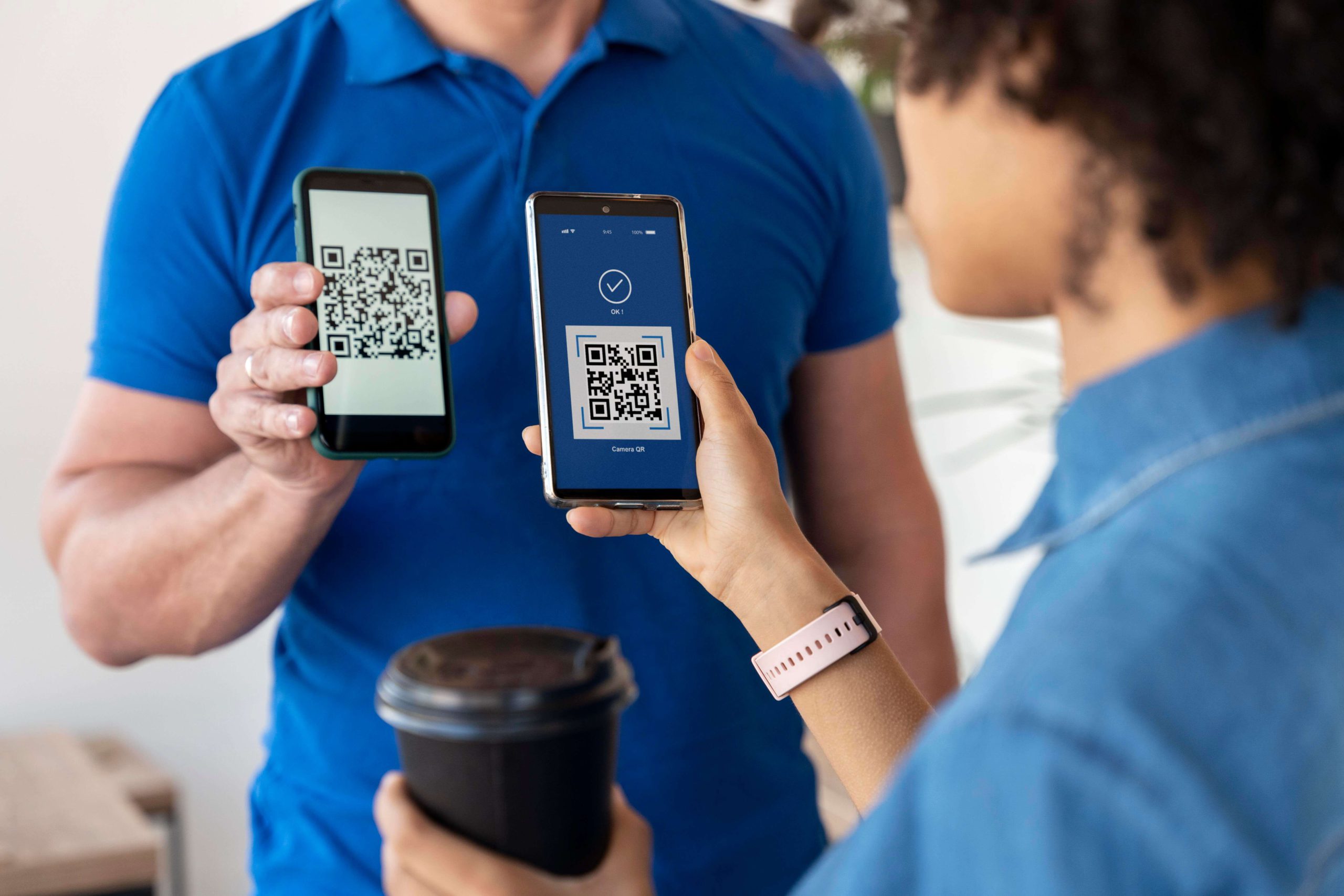 We live in a digital age with access to almost everything at our fingertips—from purchasing groceries and ordering food to paying bills and making payments. New-age payment applications such as Google Pay, Apple Pay, Alipay, PayPal, Stripe, and others have completely changed the face of money. And one such innovation, UPI (Unified Payments Interface), changed the face of Indian digital payments. Many Indians may not know the exact nuances of how it works, but still rely on UPI-based apps to make their lives simpler. And the phenomenal success of the platform is there for all to see. As of Mar 2022, UPI has registered 5.4 billion transactions worth Rs 9.6 trillion, increasing its contribution to 68% of total digital payments.

So what really is UPI? Simply put, UPI is a platform that enables users to send money across bank accounts instantly, and that too 24×7. Launched in April 2016, the massively successful UPI has helped India enhance its financial inclusion metric at a CAGR of over 5%. New market research estimates that “by 2023, digital transactions will surpass cash transactions.” 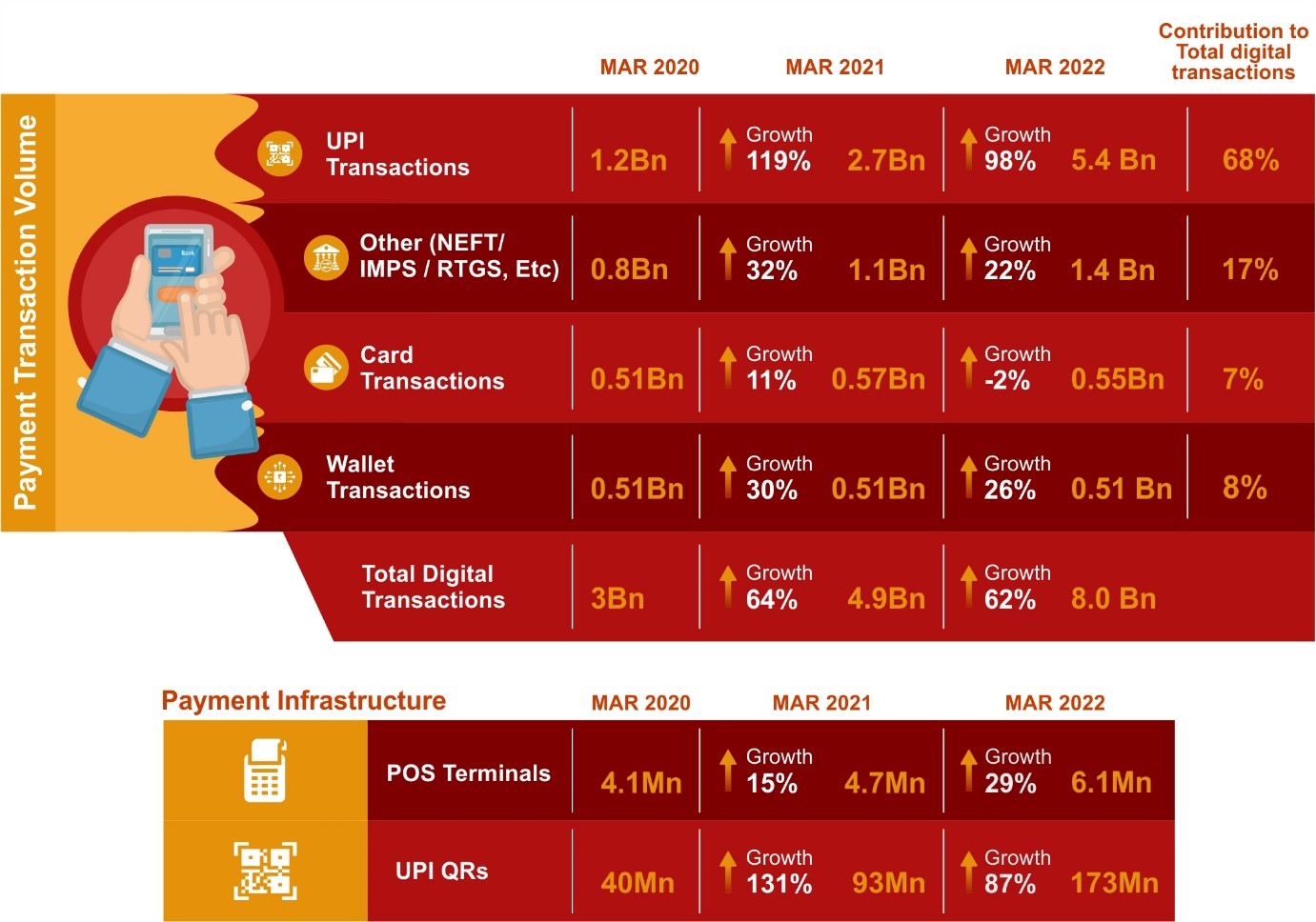 A Brief History of Financial Inclusion in India

While UPI may have changed the face of digital payments in India, empowering people at the grassroots, the story was not always as such. The economy had run on some form of physical barter or money system since time immemorial. As payment evolved from barter to gold, to metal coins, to paper notes and digital money, so did our societal structures—from an era of equality to extreme disparity. India is a nation of skewed economic extremes where 1% of the population holds over 50% of its wealth. As the payment systems evolved, the urban and middle class kept pace, but the vast rural and low-income population struggled with financial inclusion.

The urban Indian population adopted new-age tech in communication, banking, finance, and medicine, in stark contrast to their rural counterparts, who struggled for necessities owing to a porous supply chain.

This unintended financial exclusion posed a significant challenge for the government, as without democratizing access to digital payments, economic growth was impossible. Yet, in 2014, only over half  (53%) of India’s adults had bank accounts. Another challenge was that most of the population did not have the digital identity necessary to open an account, proving to be the proverbial chicken and egg situation.

The JAM troika was primarily intended to be used to implement one of the most extensive reforms in independent India—that of direct subsidy transfers to the poor. As the first pillar, it was vital to bring the unbanked population into the banking system. For this, the Prime Minister’s Jan Dhan Yojana (PMJDY) proved to be a significant achievement helping open accounts for 80%+ Indian adults. As a second step, Aadhar (Indian national identity program) was made mandatory for opening a bank account, ensuring a digital identity for all Indians. And the third pillar was digital inclusion and mobile penetration, the primary instrument to transact digital payments. Today, India has a teledensity of 85%, with 65% of smartphone users and 59% having internet access. (TRAI Report)

And while the JAM initiative solved the problem of the unbanked population, digital identity, and payment mode, there were a few other hurdles to cross before mass adoption of digital payment became a reality in India.

The conventional Indian financial system was a patchwork of systems and processes with significant interoperability issues. For example, the plethora of payment instruments did not talk, and it was impossible to seamlessly send money from one mobile wallet to another wallet or bank. As an analogy, imagine if Jio customers could only speak to Jio customers, and a call to Airtel customers would take a day.

National Payments Corporation of India (NPCI) launched UPI in 2016. The primary intent was to establish an instant real-time payment system that facilitates inter-bank, peer-to-peer, and real-time payments to solve the interoperability problem, bring ease of transactions, and enable real-time payments person-to-merchant transactions. The impact was such that UPI spawned a whole ecosystem around it, creating many opportunities that several start-ups and entrepreneurs have harnessed.

Some of the unique aspects that have made UPI the hero of digital payments include: 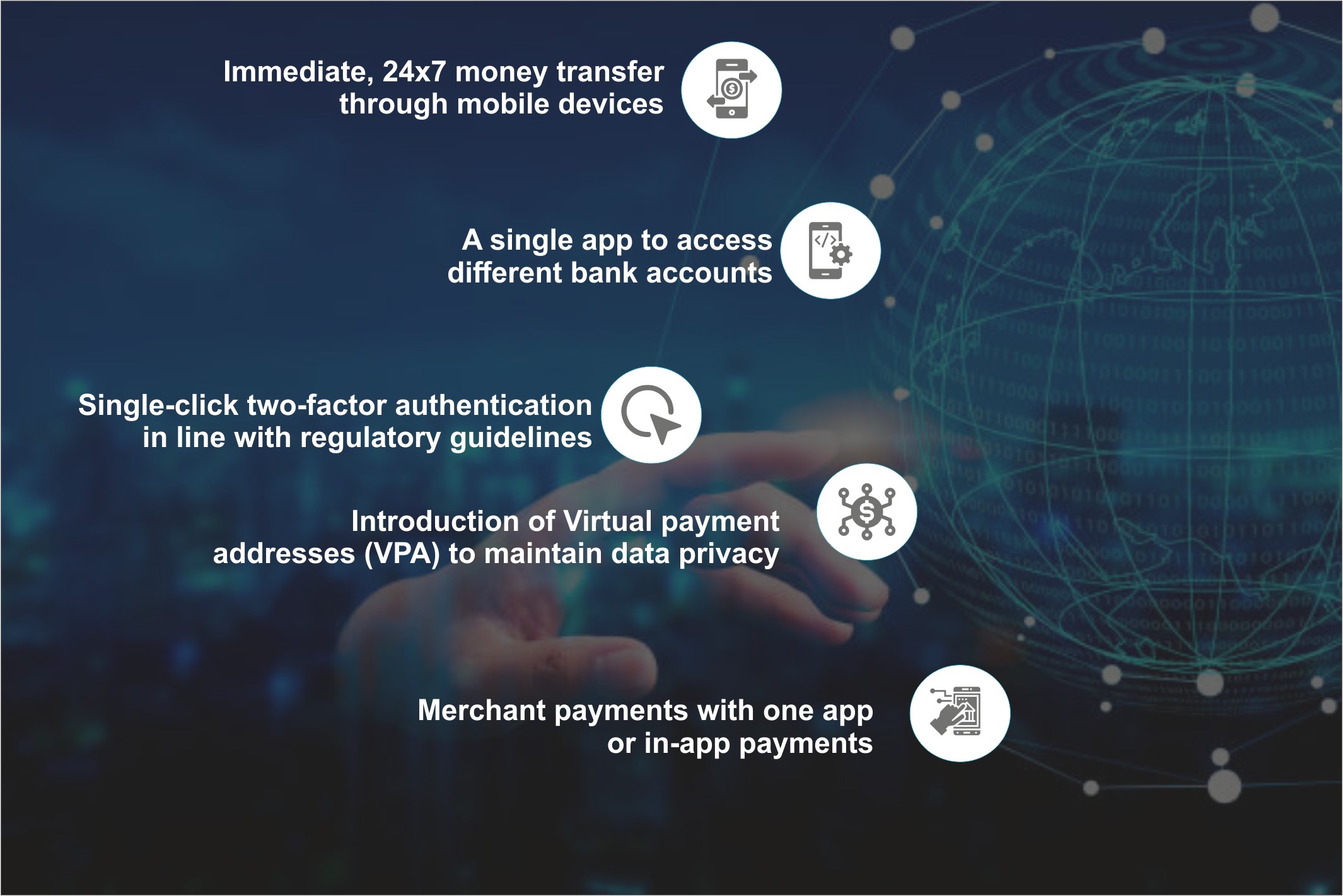 The Pandemic Push: Since its launch in 2016, UPI crossed 1 billion transactions only in October 2019. But since the pandemic hit and we saw a widespread shift towards contactless payments, the pace of growth picked up dramatically. By October 2020, UPI transactions had more than doubled to cross the 2 billion mark. Since then, the uptick has been tremendous, and UPI transactions have grown to touch 5.4 Bn in Mar 2022. 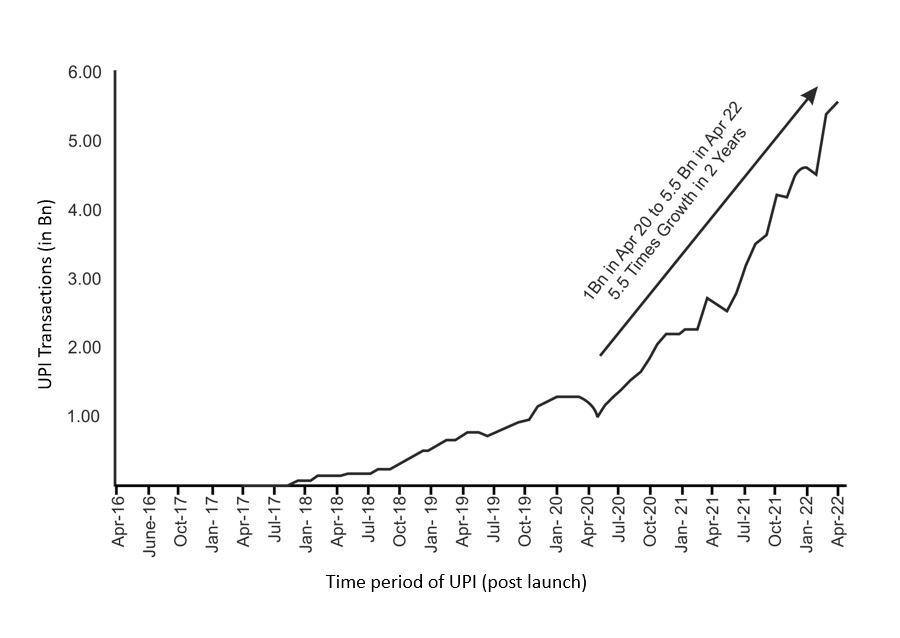 Growing Merchant Acceptance and QR Codes: UPI eased many of the merchant’s pain points, making the receipt of payments super easy by scanning the merchant QR Code from any UPI-linked mobile app. The QR code-based payment solution is highly inter-operable, contactless, hassle-free, and secure, and comes with no additional charges. Moreover, for any merchant to create their QR code, it only requires a bank account, smartphone, and access to the internet. Because of these benefits and constant push from the banks and fintechs, penetration of QR codes has increased more than four times in the last two years and now stands at 173 Mn.

And the spinoff is an intelligent, ground-breaking system that enables transactions between two parties with an exchange of “minimal information.” 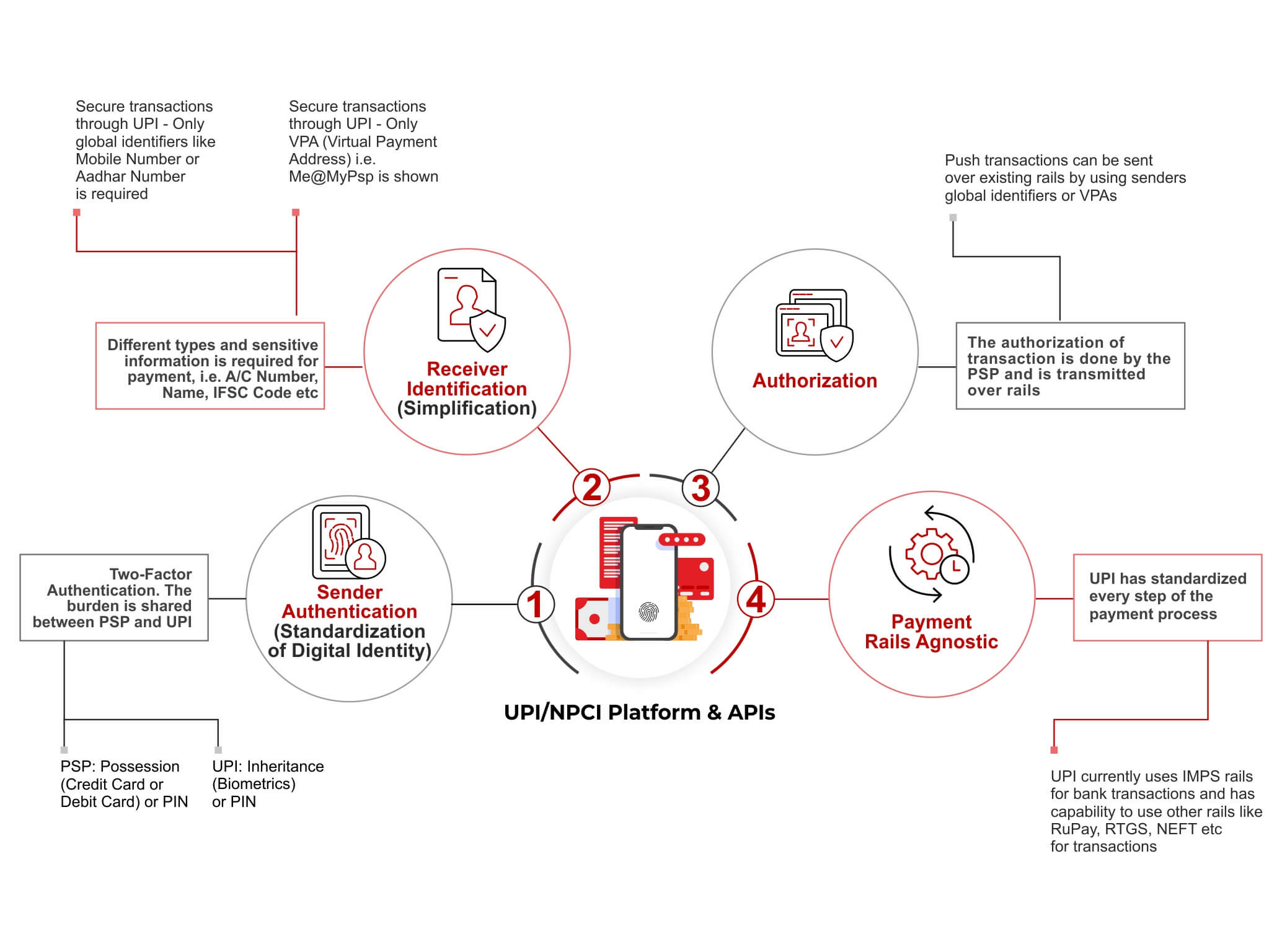 What’s Next for UPI

From registering only Rs 38 lakhs in 2016 to UPI transactions of Rs 10 lakh crore in 2022, India has embraced the technology wholeheartedly. Since its launch, UPI has been registering milestone after milestone and got a massive push from the pandemic when people avoided cash transactions.

The RBI recently announced that credit cards would soon be linked to UPI, greatly expanding the scope of UPI transactions. Given the growth of UPI, it is speculated that the platform could process a billion transactions a day. There is no question that India has clearly outpaced the world in the digital payments race. In 2021, the nation registered more than 48 billion digital transactions—the highest in the world, outpacing China by three times. And it is not an overstatement to say that UPI is at the center of India’s phenomenal digital payment and financial inclusion growth story. 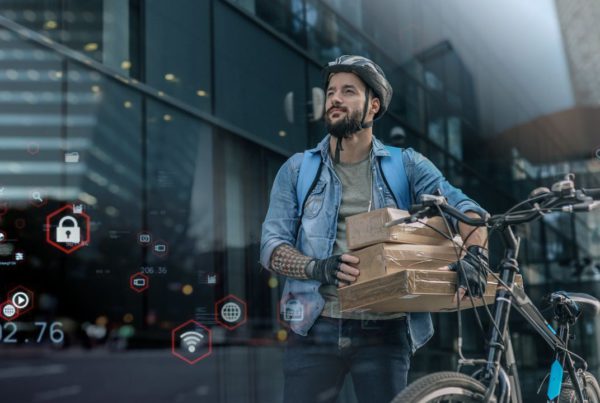 Catering to the unique financial needs of the burgeoning Gig Economy 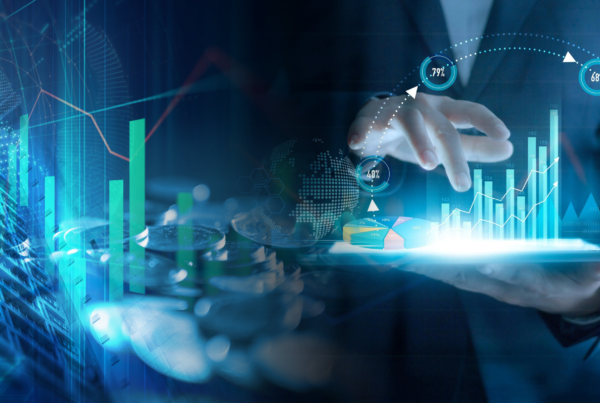 Deal or no deal? VC investments at the inflection point 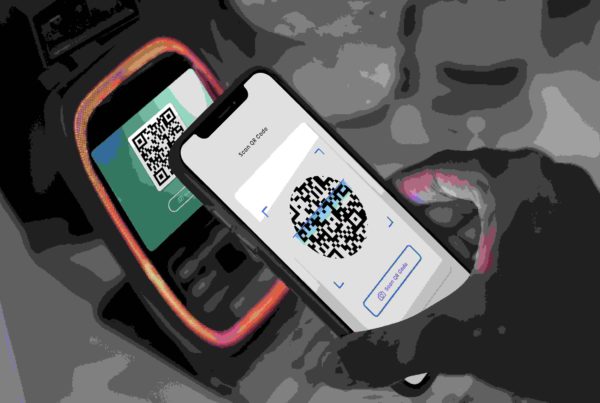